I HAVE ALWAYS BEEN ACTIVE TO SOME EXTENT.

In the 80’s, as a travelling musician, you would find me attending aerobic classes in small towns anywhere from Nain to Tuktoyaktuk! I have vivid memories of working out to Christopher Cross’s “Sailing”, wearing my Jane Fonda style ‘thong’ workout gear in Cassiar BC during the early 1980’s.

Since moving to Topsail, 22 years ago, I have been a member of every gym in the area but when I found “Sisters in Fitness”, I knew I was home!

In 2010, while watching my son perform at Holy Spirit’s Cabaret, I bought an item on auction. It was a two month membership to Sisters in Fitness Running Club.

I really hadn’t run more than a kilometre before so this was going to be something new for me. I never really thought I could run and always thought running was for other people.

WHAT I FOUND WAS A WONDERFUL GROUP OF PEOPLE WHO SUPPORTED ME ALONG THE WAY AND ALSO BECAME SOME OF MY CLOSEST FRIENDS.

Now that I was part of this amazing group, I started thinking that just maybe I could try a road race. My first race was the Mews 8K. After that race, I was hooked and a few weeks later I ran the Tely 10, a secret goal I had made to run before I turned 50!

My first “destination” run was the BlueNose Half Marathon in Halifax. The following year, I went back to the BlueNose and ran my first Full Marathon. After 4 years with Sisters in Fitness I’ve completed all the local half marathon races including “Cape to Cabot” last year.

This past January, along with some great “Sister” friends, I completed the Goofy Challenge in Disneyworld and I am currently registered for the Deer Lake Ultra 67 in August! (Gulp!!)If you’re new to ‘Sisters’, you are in for the experience of your life. This wonderful group of people will support you whatever your quest. They will be there at the start line, cheer you along the way, and hug you at the finish. 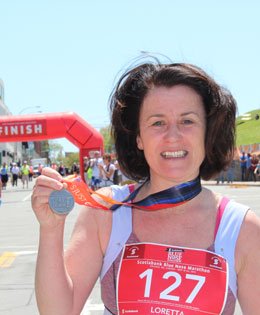