I’m a Yoga Instructor with Sisters in Fitness. You’re here poking around the SIF website so I’ll take that to mean you have an interest in being active and healthy – great, so do I! See…we have something in common already.

Well, this is a bio, so I’m supposed to tell you a few things about me and how I ended up being a part of the Sister’s family. Vital statistics first:

Born:certainly not yesterday; somewhere between The Beatles landing in North America and Neil Armstrong landing on the moon. (November 21, 1964 if you must know)

Where: historic Carbonear, NL . Family lore says I’m a descendent of the Irish princess, Sheila NaGeira and the pirate Gilbert Pike. Unfortunately, the connection is on the pirate side.

Married:  my loving and supportive husband long before a bride needed an entourage to say Yes to the Dress

Children: a gentleman’s family of a son and a daughter, who would kill me if I said anything else about them here.

Other Attachments: Ginger (our cute dog that I love to pieces); Shadow (the cat I have a love/hate relationship with); and one fish (no name – no emotional attachment).

Occupation: a nurse who works as a Health Promotion Consultant – great job!

In my “spare” time I like to: walk trails, get dragged to rock concerts by my husband, RUN!!, read Malcolm Gladwell  books, and neglect my garden. 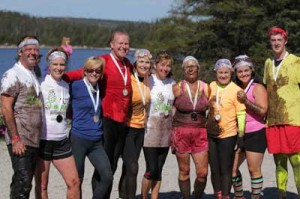 Okay, so that’s the basics. Now on to my fitness journey.

I was not an athlete as a child or very good at team sports (though somehow I ended up on my Grade 9 basketball team – worst player for sure).  And I only got a bronze level in the ParticipAction challenge in gym class. But I was always pretty active – riding my bike, playing lots of “it” and spot light, skipping, swimming, and sliding in the winter – what we did as kids when we went outside to “play”.

During university, play time became a little less active (still fun, but I’m not telling you about that).

Shortly after starting work in my twenties, I started going to “aerobics” classes at the Aqua Arena. I LOVED these – the music, the strength bands, and my acid-wash leotard (gotta love the 80’s). I also admired the instructor – how she could get up in front of the class and remember all the moves; and I wondered if that was something I could do some day. But, I’m by no means a jump-in-feet-first type of person so that thought remained in the back of my mind for many years.

Fast forward to the baby years.

Fitness for me, and perhaps for some of you too, became very unstructured, and focused on outside activities with the kids, a walk squeezed in between supper and bedtime, and sometimes very little at all. (I applaud and am in awe of all of you who carve out the time to attend a fitness class or pick up running when you have young kids. You are amazing and have figured out that you need and deserve this time, and that you and your family are better for it.) I do remember trying a Step Aerobics class during this time, but walking out in the middle of class, frustrated because I couldn’t keep up with the steps (not to worry – you’ll never have me as a fill-in for this class!)

Anyways, moving on. The kids are older. I dabbled with running a little on my own in the summers – 20 minutes maybe in the mornings before work and I joined one of the women’s only circuit type gyms close to work. This was good for a while until the gym closed.

Shortly after this, a friend told me about fitness classes she was going to at the CBS pool – Sisters in Fitness. This was a fairly new venture and she liked the variety of classes available, the friendly group, the evening schedule, and the great work out.

I joined Sisters in Fitness – signing up for Pilates at first, then trying other classes such as Iron Woman (a favourite), Cardio-Kick, Armed and Dangerous, Abs Blaster, and HITT. I also thought that maybe I could become a real runner  – move beyond my 5K – and joined SIF Running Club.

It’s here that I was introduced to Yoga, when April taught the very first Yoga for Runners sessions.  At first, the poses felt awkward but I loved the peacefulness of the movements and how I felt afterward – relaxed, contented with life, and strong. Such a wonderful complement to running.

Flashback to the thought in the back of my mind of being a fitness instructor.

This journey started not with Yoga or fitness but with running. I wanted to give back and help others achieve their running goals, to share my experiences. (Since joining the running club I have completed numerous races including several ½ marathons and a full marathon; and am training for a marathon and a half in January 2014). Running instructing proved to be a rewarding experience, and along with encouragement from April and Michelle, gave me the confidence and motivation to complete the YogaFit Level 1 Instructor course in the fall of 2012.

With a nudge from Michelle, and at the age of 48, I started teaching Yoga for Beginners a couple of months later; and have since taught Yoga for Runners and Yoga Pilates Fusion. I have found that my quiet voice and demeanor – something that I always thought of as a weakness – is actually an asset.

So, what does the future hold? Hopefully a long, healthy life –I’ve decided 93 is perhaps a good age to call it quits. But hopefully by that time I’ll have finished that marathon and a half (never said I was a fast runner); completed level 2 or 3 as a Yoga Instructor and maybe certification as a Fitness Instructor. 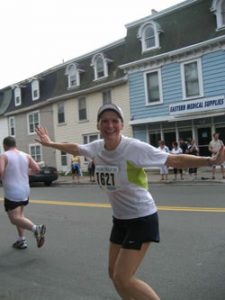 That’s the end of my bio, but certainly not my journey. I hope you enjoyed reading it; found pieces of it that you could relate to; and took away a nugget of helpful information. As Michelle and April often say, and it’s become the SIF philosophy, fitness is not a destination, but a journey.

Find something that you love to do – it makes doing it a lot easier. Have a goal or two tucked away in the back of your mind – better yet, tell others about it. Surround yourself with positive people who support and encourage you. Take advantage of opportunities that come your way. And remember, you’re never too old to start.

Hope I meet you in class – Namaste.